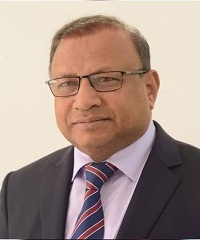 Md Tazul Islam, Honorable Minister, Ministry of Local Government, Rural Development and Co-operatives, is a prominent political personality, successful businessman and a reputed social worker of the country. He was born in 1955 in a respectable muslim family of the village Pomgaon of Monohorganj Upazila of Comilla district. He is the proud son of Alhaj Julfikar Ali and Mst. Anwara Begum.

He started his student life in Pomgaon Government Primary School. He completed secondary and higher secondary level education from Pomgaon High School and Nobab Foijunnesa Government College respectively. He completed his graduation and post-graduation from the University of Chittagong. Afterwards he obtained Diploma in Accounting & Finance and Masters of Business Administration (MBA) degree from the prestigious Aston University and Southern University of London.

In his illustrious career he established many industries, insurance companies, banks and other institutions that are contributing in the overall development of the country. He is also associated with the endeavor of publishing a daily newspaper in order to mobilize general mass for adorning honesty, sincerity and patriotism.

Tazul Islam is actively involved in politics from his student life to build “Sonar Bangla”, a country free from poverty, hunger and all forms of discriminations & oppressions, which was the dream of Bongobondhu, the Father of the nation Sheikh Mujibur Rahman. Motivated by the spirit of the Father of the nation, he participated the National Elections with the Symbol “Traditional Boat” (Nouka) and become Member of Parliament (MP) in the year 1996, 2008, 2014 and 2018. This time honorable Prime Minister Sheikh Hasina appointed him as Minister and has given the charge of Ministry of Local Government, Rural Development and Cooperatives. In the previous terms he performed as the member of parliamentary standing committee of the Ministry of Home, Ministry of Finance and Ministry of Planning. He was also the president of the parliamentary standing committee of the Ministry of Power, Energy and Mineral Resources. During his carrier as a businessman and politician, spanning over 40 years Mr. Tazul Islam garnered diversified experience particularly in dealing with public and private sector policy formulation.